The 2022 Extraordinary Christmas Draw will be held on Thursday, December 22nd. Learn all about the most important Spanish lottery draw and how to participate.

December is approaching, and with it also comes the most important Spanish lottery draw: the Extraordinary Christmas Draw, also known as the Christmas Draw, which will be held on Thursday, December 22nd from 9:00 am (Madrid time) and will distribute a total of 2.5 billion euros in accumulated prizes, a historic figure to date!

This is the most awaited draw during the year by all Spaniards, not only because of the incredible amount of its prizes, but also because it is already a national tradition and spectacle: during the approximately 3 hours that the draw lasts, almost all households are attentive to the transmission of the event and to listen to the children of San Idelfonso singing the winning numbers of the 5 main prizes and the thousands of secondary prizes.

The good news is that it is possible to participate online by buying tickets for the Christmas lottery from anywhere in the world, so Spaniards outside Spain, or anyone who wants to participate, has the possibility to play by buying their tickets online, which are already on sale.

What is the Christmas Lottery?

The Christmas Lottery, as it is popularly known in Spain, is the Extraordinary Draw of the National Lottery. Held for the first time in 1812, since 1992 it is held every year on December 22nd.

The peculiarity of this draw is that it distributes thousands of prizes, which in total amount to 2,500 million euros, with a first prize that reaches 4,000,000 euros.

Given the amount of prizes that are distributed, the draw begins at 9:00 am and lasts approximately 3 hours, being televised since 1957 for all households in the country. Since its origins, the people in charge of collecting the balls with the winning numbers and "singing" the results are the so-called Children of San Idelfonso, the name given to the students of the San Idelfonso School.

How to play the Christmas Lottery?

The Christmas lottery follows the same dynamics as the rest of the National Lottery draws. This lottery is played with a 5-digit number, which is known as " tenth". This 5-digit number can range from 00000 to 99999. Therefore, on the day of the draw, 5 balls are selected for each prize, each of which has a number from 0 to 9. The combination of these 5 numbers creates the tenth winner of each of the prizes.

Why is the bet called a tenth? Because in truth, each ticket formed by the combination of the 5 numbers is divided into 10 parts, called tenths: each bet is the tenth part of a ticket.

This means that, at the moment of buying his bet, the player can choose whether to buy from 1 to 10 tenths: if he buys all 10 tenths, he will buy the whole ticket, while, if he buys only 1 tenth, he will buy a tenth part of it.

What are the prizes of the Christmas Lottery?

This year, the Christmas Lottery distributes in total about 2,520 million euros in prizes, since the number of series has been increased with respect to last year. The main prize, which is known as the Christmas Gordo, has a value of 4,000,000 euros (which means about 400,000 euros per tenth).

In total, there are 5 first prizes, in addition to the Pedrea, the approximations and the reintegros.

What are the 5 prizes of the Christmas Lottery?

What is the Pedrea of the Christmas Lottery?

The Pedrea brings together all the smaller prizes of the Christmas Lottery, a total of 1,794 prizes of 1,000 euros each. Throughout the draw, the children of San Idelfonso sing their traditional "one thousand euros!" when one of the numbers drawn randomly corresponds to a Pedrea prize.

What are the approximations of the Christmas Lottery?

Approximations are prizes awarded to those numbers that "approximate" the winning numbers of the first prizes. There are several types of approximations:

What is the Christmas Lottery Reintegro?

The Reintegro is a prize that allows to recover the value of the bet. All the lottery tickets whose last number coincides with the winning number las number, will be awarded with the Reintegro.

In the following table, you can check all the prizes that will be drawn in this year's Christmas Lottery: 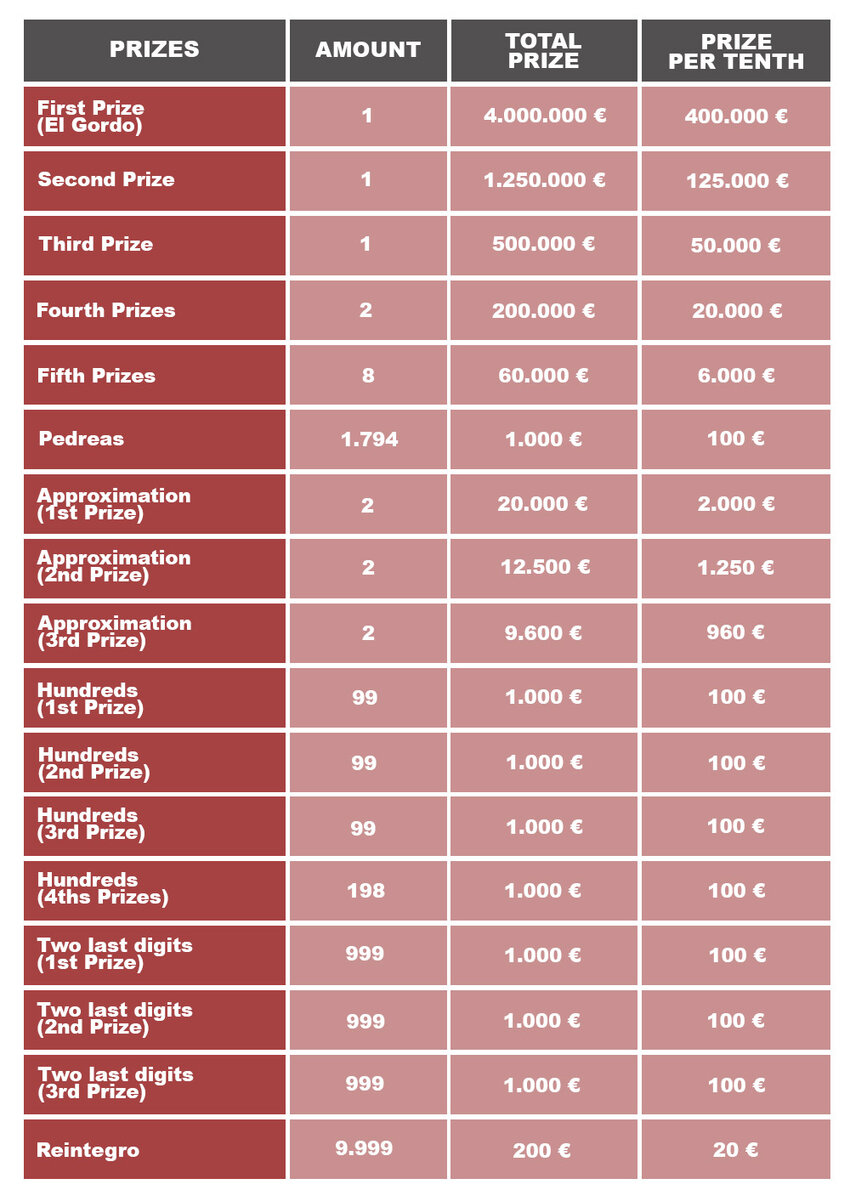 We use own and third party cookies to improve our services and your browsing experience. If you continue browsing we understand that you accept our cookie policy

I do not accept